By: Admin
In: Uncategorized
With: 2 Comments

As some of you know, I went to the Bengal game last Sunday.  It was great to meet reader Sean and his family.  I will admit right off the bat, that I left at the 2-minute warning.   I thought a 16-point lead with 120 seconds left was a safe lead, but what do I know?

I decided to jot down my experiences Sunday and over the years, and ask you guys about your live experiences.

Missing Announcers.  I’ve never enjoyed live sports as much as on TV.  I appreciate the analysis and the replays and the explanations.  Sitting in a stadium watching the refs huddle together–with no explanation–is boring and confusing!

On Christian Wilkins’ touchdown, for example, it looked like an incomplete pass.  I was wondering what the announcers were saying.  Was it being reviewed in New York? As biased and wrong as the announcers can be, they do add something to viewing a game.

Seeing subtle innuendos.  All NFL teams make substitutions on virtually every play, and that is nothing new.  But for the Dolphins, I noticed one strange thing.  I saw several plays when Albert Wilson was on the field running a long route.  After the play, the Dolphins began their substitutions.   I saw two TEs, Gesicki and Smythe, jog onto the field about 5 steps.  But then Albert Wilson, who was returning to the huddle after the previous play, waved them off.   Wilson made eye contact with the TEs, and waved them back to the sidelines.   The TEs complied, and the Dolphins made no substitutions.

I found this odd.   My only guess is that Wilson saw something in the coverage that he liked, and he has the ability to make a decision about the personnel on the next play.   I had never seen this before, and announcers certainly don’t pay attention to those nuances.  I don’t know of other teams that give a WR the ability to veto a play/formation that the OC had just called, so I’m unsure if my theory is correct.  But despite my guesses, I definitely saw two TEs about to enter the game, but then Wilson waved them back to the sidelines.

HR Stadium is supposed to have free WiFi, but it was sporadic all day long.

There were a handful of Bengal fans there, but it was hard to tell because there were so many orange shirts between both teams’ fans.   I had the same issue when I saw the Broncos play here.  A LOT of orange, LOL.   But the Bengal fans were sparse compared the Patriot fans that come down to Miami once a tear.   I guesstimate that 40% of the fans are Pat fans when they play down here.

The attendance was horrible, by the way.  The empty seats were embarrassing.  I think a strong team will increase attendance.   But a rainy game between two last-place teams?  I guess the crowd was what you’d expect.  Speaking of this, Ross made a monumental mistake with those luxury seats along the perimeter of the field and the 72 Club luxury seats.  Could you imagine the Dog Pound or the Lambeau Leap into empty millionaire seats?   The seats closest to the field should be packed together tightly with the most loud, fervent, loyal fans.  It’s called Home Field Advantage. something Ross shuns.  Most of the millionaire plush leather box seats were empty.  Those that were occupied got specialized food and drink service…meaning they were reading menus all day long and barely watching the game.  There is room in those boxes for about 20 regular seats, or 4 leather recliners.  The loudest Dolfans need to be closest to the field, not the disinterested millionaires.

Ross need to reinvest HRS and make it more like the glory days of the Orange Bowl.  Make teams fear coming down here.   Make opposing fans think twice about buying plane tickets down here, knowing they’ll be surrounded by hostile Dolfans.  I wouldn’t go to Pittsburgh or Buffalo wearing my Dolphin gear, and we need to make opposing fans feel the same way.

I heard Andy Dalton’s calls all day long.  The crowd noise was nonexistent. Although, I myself was pretty quiet as well.  It was very hard to root for my Dolphins on a day when I knew it was better to lose. I wanted to be happy for Gesicki’s second touchdown, but when he caught that ball, all I could think of is bye bye Chase Young.

The cheerleaders changed outfits a few times.  That was kinda cool.

Seeing the Perfect 1972 Team and Coach Shula at halftime was awesome.  I knew the TV networks wouldn’t air it, so I stayed in my seat at halftime and took it all in.

I saw one of my favorite trivia answers there too!   In 1972, we know Griese went down and Earl Morrall took over.   But who was Morrall’s backup during the games Griese was on IR? 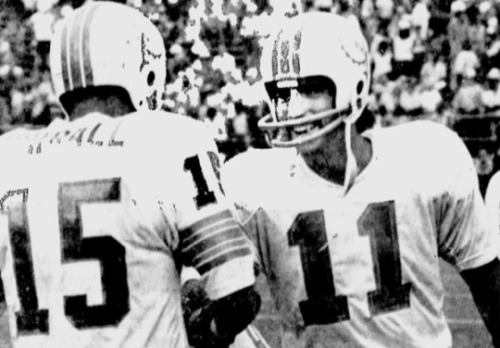 It was Jim Del Gaizo, and he was there Sunday.  Who remembers Jim?  He began the year as our third-string QB, and moved up to 2nd-string when Griese broke his leg.   I know he did some mop-up duty and had a few TD passes in 1972 during blowouts when they rested Morrall, but other than that, he has slid into oblivion.   Nice to see him honored Sunday as part of Perfect History.